The sanctuary of Covadonga is the Santiago de Compostela of Asturias. Although the journey from Gijón is with just 70 kilometers much more modest than the Camino to Santiago, it’s still a big challenge. The road goes through the rough landscape of Asturias and is thus rarely flat. A two or three day trip by foot or a one day ride by bike take you from the biggest city of Asturias to the sanctuary. I chose for the second option. This article is about my experience, and about the do’s and don’ts of the Camino de Covadonga.

It was an incredible experience, in a positive, but sometimes also in a negative way. Hopefully you’re better prepared after reading this article than I was, so can enjoy the journey even more. Because it shows you some of Asturias’ most beautiful spots.

In the the Picos de Europa, hidden between mountains and forests, the small town and it’s idyllic basilic are waiting for the enduring pilgrims. Covadonga got the status of pilgrimage because of the battle Don Pelayo fought there in 722. After hiding for four years, he defeated the Mores in the village and initiated the Reconquista, the re-Christianizing of the Iberic Peninsula, which lasted more than five centuries. Now only 70 people live in the small village, of which the Santa María Real de Covadonga Basilic is the architectural highlight. It was built between 1877 and 1901 and is of divine beauty. Of the old Chapel, which burned down in 1777 only remain the square and a tomb.

Just like the Camino de Compostela, the road to Covadonga is today not only walked by religious people on their quest for salvation. The way to Covadonga is a sportive challenge for hikers who want to enjoy calmness, nature and beautiful rural villages. There are multiple ways to Covadonga, from Oviedo, Llanes or Gijón to Covadonga, but in this article I will discuss the route from Gijón.

The website of tourism of Gijon says the way can be done by foot or by mountain bike, DON’T BELIEVE THEM! It’s very much possible by foot, but doing this route by bike is absolutely not recommendable. Many times you have to walk on a narrow path through the woods or even in deep mud. About a third of the distance I had to push the bike, often uphill. This really was very energy-consuming.

Other tracks were perfectly possible.I left Gijón around 10 o’clock. My expectation was to do the total ride in 5-6 hours, visit Covadonga and return by train at 19:33 from the station of Arriondas. In total it would be a ride of about 90 kilometers.

This turned out to be absolutely unrealistic. After 8 hours, I had to take the train back to Gijón in Villamayor, somewhat over halfway. Although I could have driven faster and also stopped several times for a break, the original plan would probably be nearly impossible. Because I expected to drive on asphalt or grind roads, not on the goat paths that I eventually faced. So unless you’re a trained mountain bike rider, the challenge might be too tough.

But the rough and difficult roads didn’t bother me as much as the HORRIBLE signalization. The lack of (consistent) indications really drove me crazy at times. The reviews I read online spoke about a clear route, which is easy to follow. I strongly have to debounce this, the hardest part of the journey is staying on the right track. Finding the starting point was already a titan job, because you only see the first indication after 2 kilometres. To save you these troubles: the route initiates next to the camping of Deva.

From then you have to follow three types of signs which appear in a random order: the signs which look official and say “Camin de Covadonga or Cuadonga”, yellow arrows and blue arrows. It’s really frustrating to have no idea if you’re walking on the foreseen way, but I can tell you, it’s an amazing feeling when you see an “official” wooden sign and know you’re still right.

Because the route coincides with the opposite direction of the Camino de Santiago, you often find arrows pointing towards you, which can be very confusing. My tip: use Wikiloc. The website that offers hiking maps is a great help to check if you’re still on the right way. It would have been otherwise nearly impossible for me to find some small roads. This is the route I followed.

But hey, it’s not all doom and gloom. If you’re up for some adventure and don’t mind actively hunting your way, the Camino de Covadonga is something for you. The signalizations are not that good, but the setting is amazing. You go from mountains to valleys, through villages and across rivers. You can spot birds, no idea which ones, I’m not an expert. Or look at the lizards on a sunny day.

Everything is so calm and quiet. Unlike the busy Camino de Santiago, the road to Covadonga offers you a chance to be alone for hours and enjoy the pureness of nature. I didn’t meet another person doing the same route. Only in the small villages you meet some friendly souls. For example, Adam and Maria, who moved from England to the small town Huentes to open a bed and breakfast. 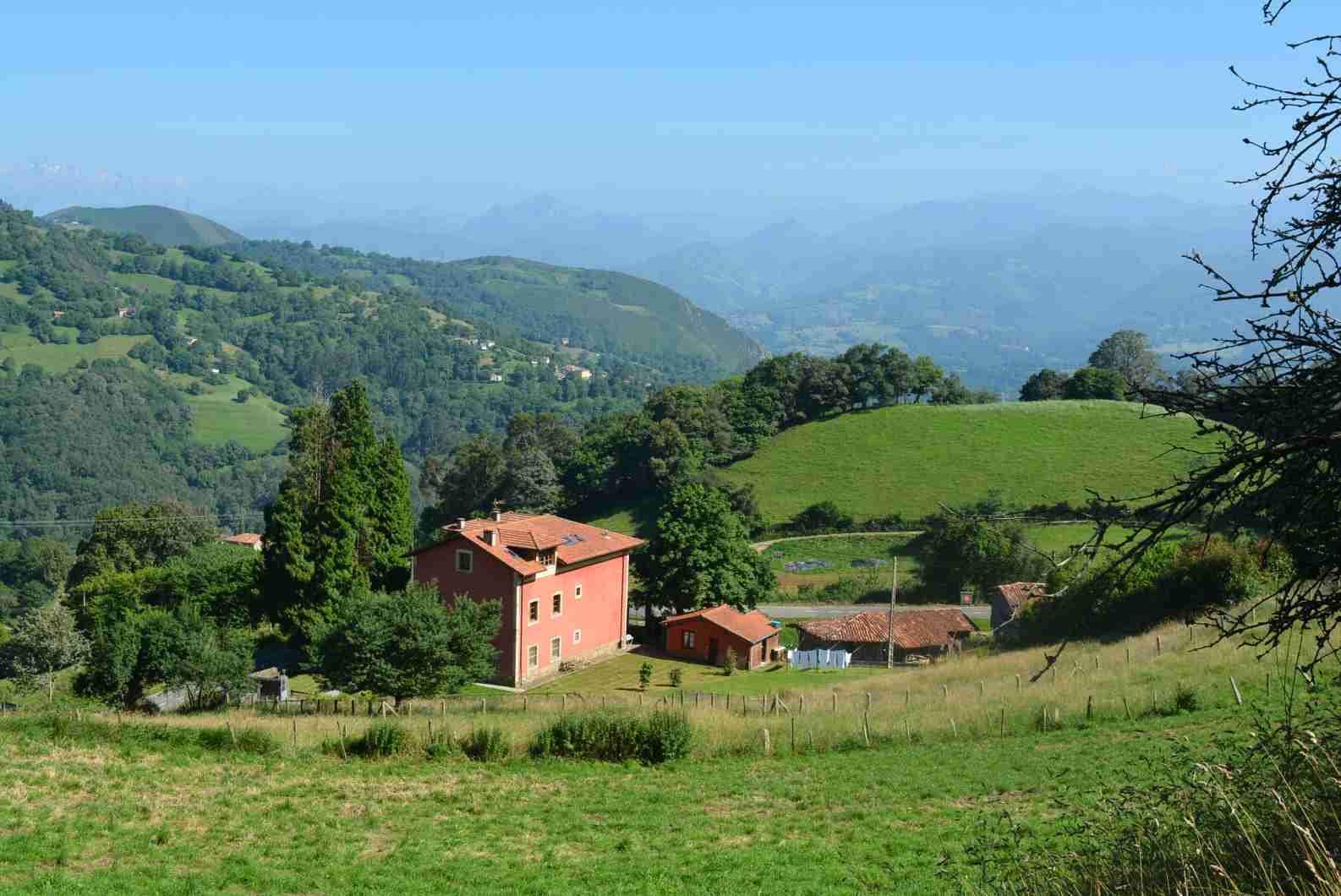 The town is right in in the middle on the way to Covadonga. And I must admit, I understand why they chose that location to settle. The view they have is absolutely stunning, with the Picos de Europa looming at the horizon. Just like their spot, there are many places where you have a kilometers-far view over the valley. Where only a few small orange-brownish villages in the distance contrast with the green flora. 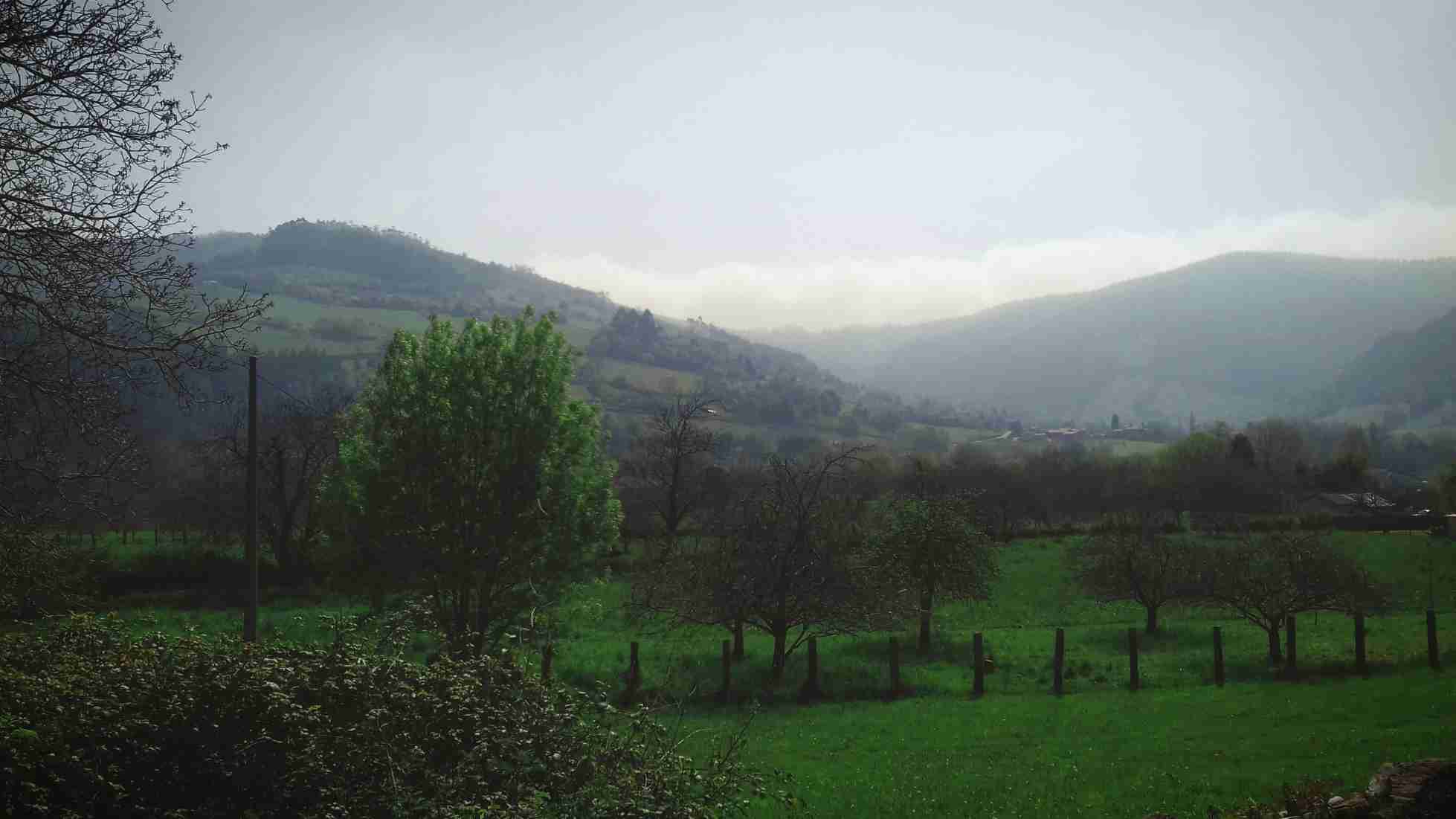 I was actually much more impressed by these sights than with the recommended touristic attractions. The famous Roman stone bridge in Cangas de Onis was on my list of must-sees during my trip. It is a gorgeous bridge, I don’t deny that, and it was also bigger than expected. But based on the pictures on the internet, I imagined a remote bridge in the middle of nowhere. This is absolutely not the case, the bridge is located in the center of a busy town and even has a terrace of a restaurant just next to it.

Just like Cangas de Onis, Covadonga is very touristic. Every few minutes a new bus of people is dropped off at the entrance of the sanctuary. And a row of stands sells merchandise to large amount of visitors.

I must admit, the basilic is gorgeous! But again, the nature is the protagonist of the setting for me! These Picos de Europa are just so incredibly spectacular. The virgin and cave of Covadonga are also a nice place of interest that you should definitely visit once you’re there. The little lake in front of the cave has two interesting traditions: throw a coin in the water for good luck and drink from each of the 7 streams of the little fountain to get married soon. 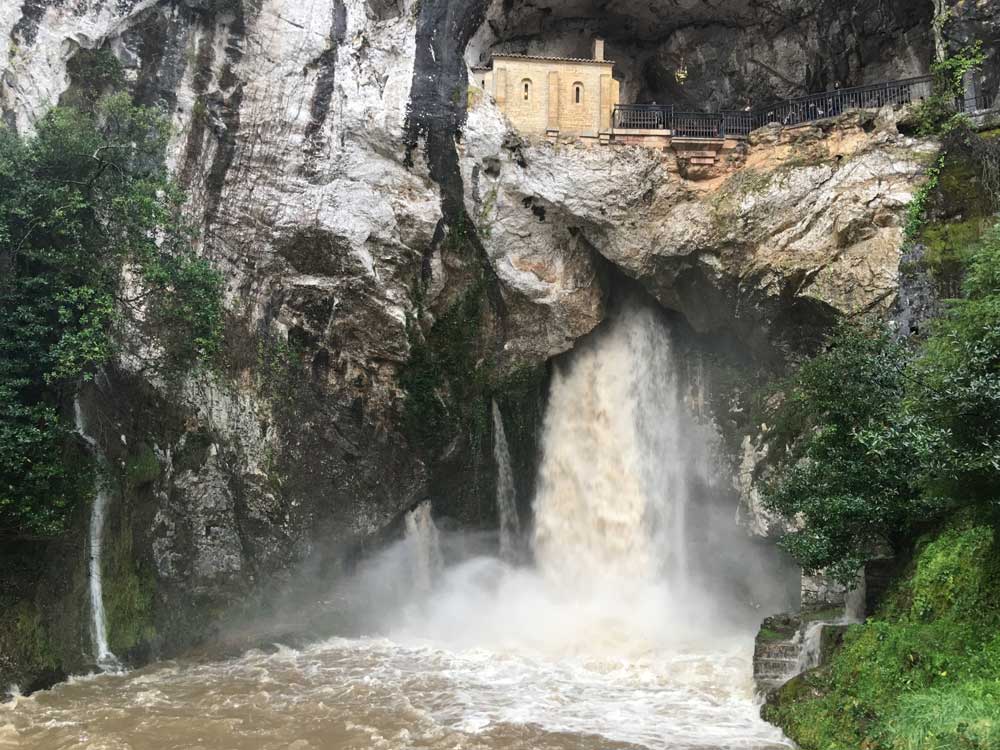 The Camino de Covadonga is a beautiful route, and shows you some of the nicest places of Asturias. The forrest, rivers and villages on the way are of a true and pure beauty.  It’s only a bit a shame that the road and signalization have become so deteriorated. But I guess all of this fits in the idea of a pilgrimage, where you’re physically challenged to reach the highest good. 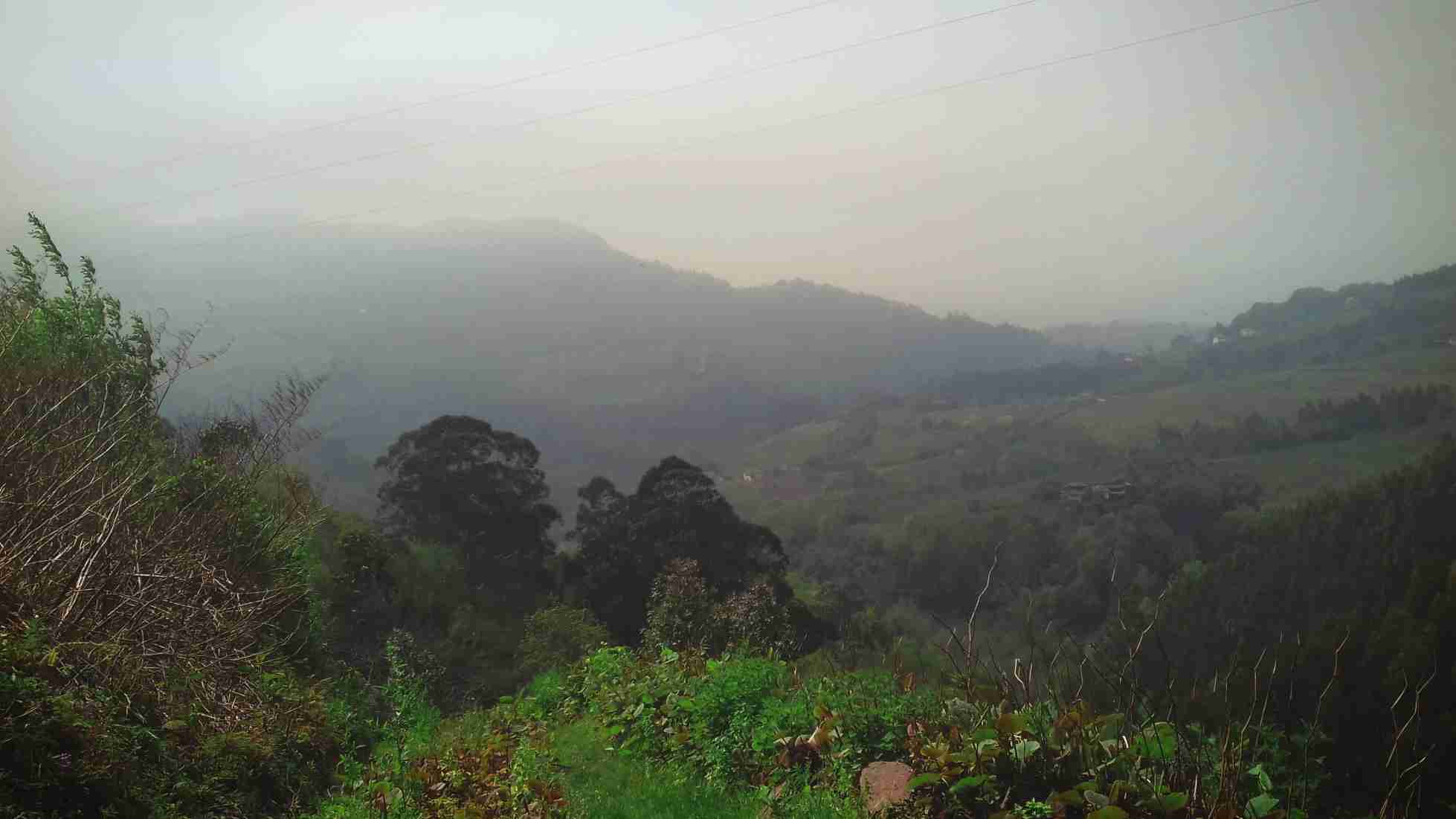 If you aren’t scared now, which you shouldn’t be, here are some practical tips:

These are some suggestions to plan your trip:

A suggestion to stay in Huentes.

You can go back from Covadonga by bus. Although you have to change twice (in Cangas de Onis and Oviedo)

It’s recommended to cut off certain parts of the track if you notice the path doesn’t on a normal road map or looks quite sketchy. This way you can avoid unnecessary physical efforts.

An extra tip for cyclists:

If you’re a sporty type, you can combine your visit to Covadonga with an ascend to the Lagos de Covadonga. Especially if you plan to do the route in two days. The climb and the views along the way had a bigger impression on me than the sanctuary. The lakes, which are located 12 kilometer further uphill on an altitude of more than 1200 meter, are absolutely magical. But, it’s a really though climb, with percentages over 10%. There’s also a shuttle bus running from the foot of the mountain to the top. 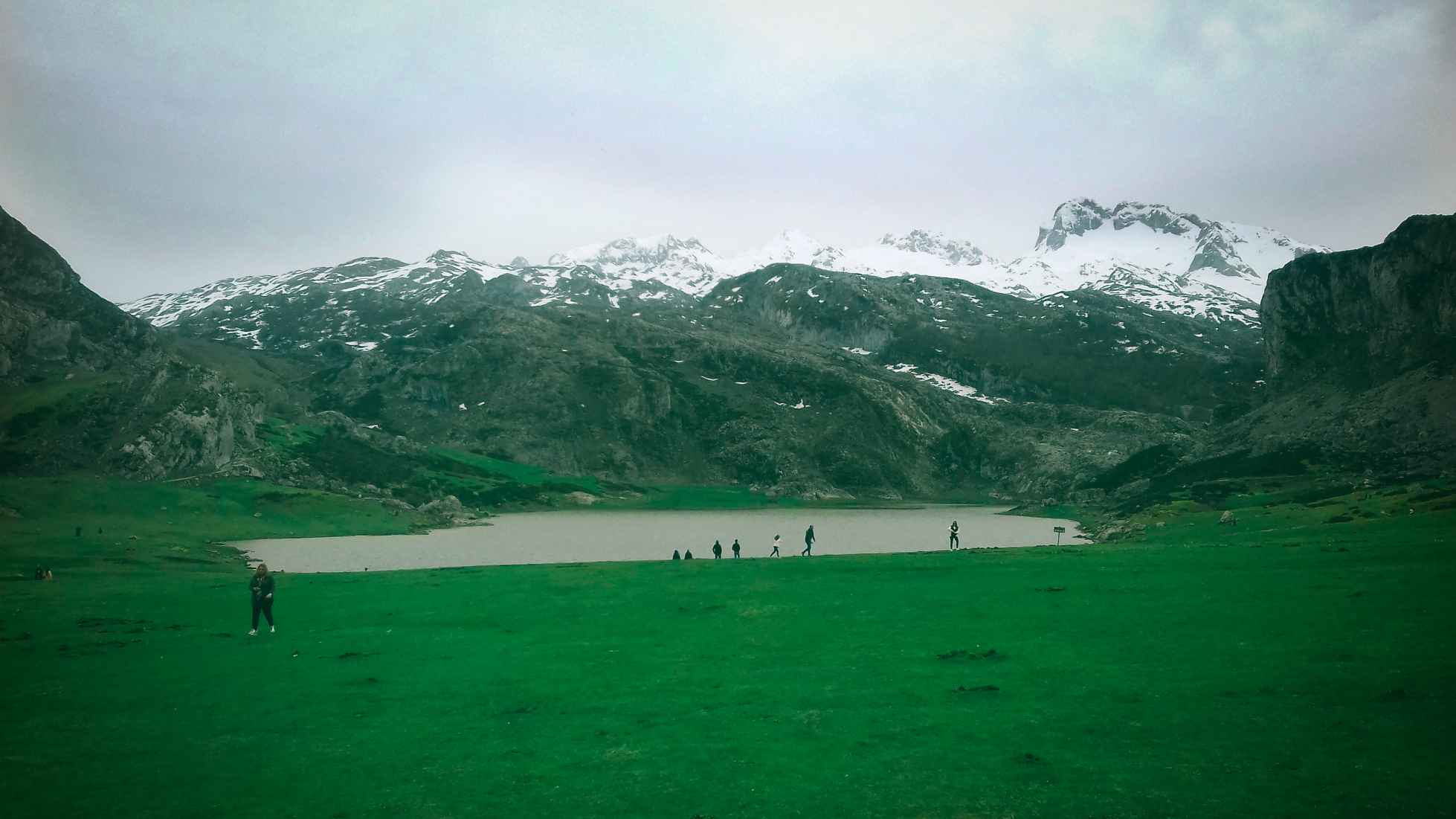 The Lagos are of an extraordinay natural beauty