Cimadevilla is not only one of the most charming neighbourhoods but also a witness and protagonist of significant historical events in Gijón: from Roman times, medieval conflicts, the development of the port to the beginnings of industrialization. The monuments in the upper neighborhood of the city manifest traces of fishermen, soldiers and artisans. The men and women born and living here used to be called “shallow” and Cimadevilla maintains its ancient folk aspects, however, nowadays it is one of the most beloved districts in Gijón – not only for tourists but also for locals. During the day, the streets seem pretty calm but at night, they become the meeting point for all kinds of people. Restaurants, bars and night clubs housed in historical buildings invite you to spend a nice time. Seafood and cider are served in pretty much all venues due to the history.

We have put together a tour around Cimadevilla which enables you to explore the beauty and spirit in the Old Town of Gijón – all within walking distance!

1.  Starting at Plaza del Marqués, located at the bottom of Cimadevilla, you can already get a first impression of the lively atmosphere in this area. All around the fountain underneath the statue of Don Pelayo, the first king of the Asturian monarchy, people are rushing from one side of the city to another or just enjoying the sun in one of the cafés right in the middle of the square. The baroque Palacio de Revillagigedo in the background currently serves as an International Center for Contemporary Art and contains an important documentation center and library. 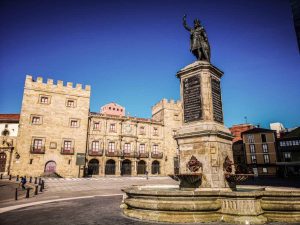 From here, take your time and stroll around through the gorgeous streets to discover tiny restaurants, colourful house fronts and other surprises leading up to the remainings of Gijón’s ancient past. There is a feast for your eyes waiting around every corner! 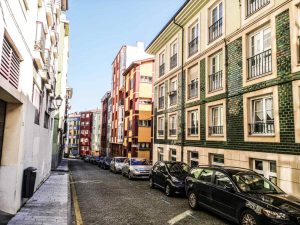 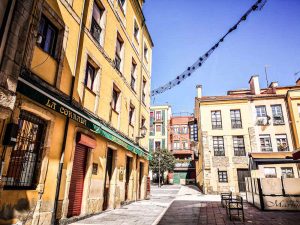 2.  A brickstone wall of 850 meters length surrounding Cimadevilla reminds of Gijón’s Roman past. The entire history is still explored today with the help of multiple excavations and other archeological projects. Everyhting that is known until now can be discovered in the subterranean Roman museum in the Termas Romanas. 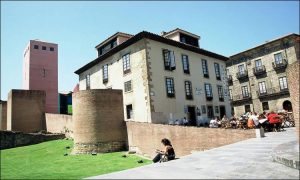 3. These steps have a message: Continue your way to the north of the city and find the Escaleras contra la violencia de género. As a symbol of equality, the stairs at the entrance of the park Santa Catalina were painted in the colors of the rainbow and annotaed with statements that raise awareness against gender violence in 2017. “His love does not harm, your hate does”, “Love is not control” or “They are not dead, they are killed” – every three steps a message reminds of the omnipresent issue.

4. Cimadevilla, which literllay means “above the town”, indeed captivates with its stunning views of the entire city. The hill Cerro de Santa Catalina with its famous abstract concrete sculpture Elogio del Horizonte (Eduardo Chillida), one of Gijón’s landmarks, enables you to enjoy the sun on the green meadow surrounded by foaming waves and surfers at the beach to your right, old fishermen in the harbour to your left and the Cantabrian mountains in the background. 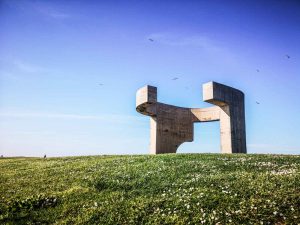 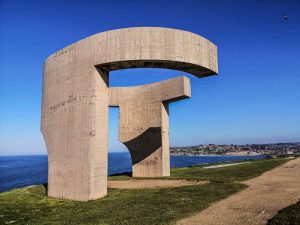 5. Cross the Cerro de Santa Catalina in western direction to find a cool local’s spot: The skatepark is a popular place for young people to hang out in the evenings and show off their skills on the board, their in-line skates or scooters. Stay around even if you feel like you can’t show off anything on one of these equipments! It is fun to just watch the sometimes super young talents and you sure won’t be the only spectator for too long! 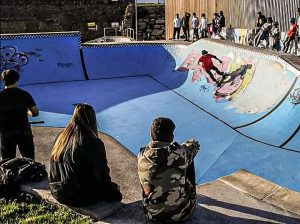 6. On your way down to the harbour, you will come across La cuesta del Cholo, which probably does not look very special at first sight. It’s a small cobblestone street with a restaurant and a bar attached. However, as soon as the sun starts setting, this is THE place to be in the Old Town of Gijón! Dozens of young people gather around, grab a drink at the bar and enjoy their after work time chatting with friends. Just mix with the crowd, feel the Spanish lifestyle and have some pipas (sunflower seeds, a popular snack in Spain)! 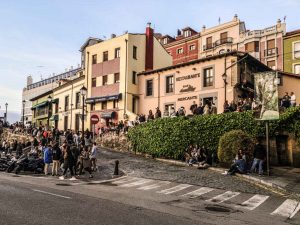 7. Just because Cimadevilla is the Old Town of Gijón, that doen’t mean it ignores modern pop culture. Along the harbour’s esplanade, you will find another colourful staircase: the Stairway to Heaven. Labelled with the 50 best albums in the history of rock, this lane is a tribute to bands like the Eagles, The Rolling Stones or Pink Floyd and a great photo spot! 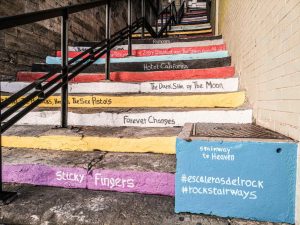 8. Slowly returning back to the starting point of this tour, you will see the Arból de la sidra already from far away. In 2013, a tree of cider bottles was arranged in Gijón with the aim of promoting recycling. Weighing almost 8 tons, the tree holds 3,200 green glass bottles, which were placed upside down so that left-over cider can pour out. This quantity is the equivalent to the annual glass consumption of one hundred families. The work is illuminated at night by a large lamppost housed inside the Arból. 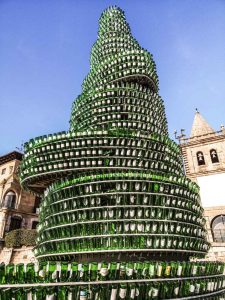 9. Finish your day in Cimadevilla at the sports port of Gijón. Here you can look at hundreds of sailboats and catamarans, watch them discard and land or – if you posess a license – rent a boat for your own and explore the Atlantic Ocean. You can also rent bikes and speedboats here, or just have a coffee along the seafront. Whatever you decide on – enjoy your day in the diverse and beautfiul neighbourhood, Gijón’s Old Town Cimadevilla! 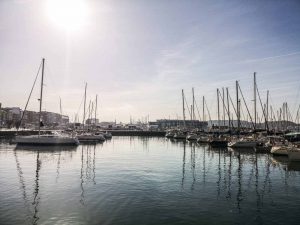 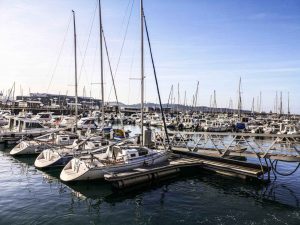