Few climbs are so feared by professional and amateur cyclists as the Alto de l’Angliru. Often called the hardest climb in Europe. A monster of 12,5 km at an average gradient of 10,1 percent. But these numbers don’t tell the whole story, the reality is worse…

In 1999, the organization of the Vuelta a España was looking for a climb which could compete with the Tour de France’s Alpe d’Huez and Giro d’Italia’s Mortirollo. Two other infamous climbs in Europe. The team director of ONCE, Miguel Prieto, was Asturian and knew a traitorous mountain road. But which had never appeared in any professional cycling race. And so they came up with the Alto de l’Angliru, a climb so steep and demanding its difficulty easily transcends the mountains of the Tour and the Giro. With a peak of 1570 m above sea level after covering an altitude change of 1248 m. In 1998, the municipality of Riosa improved the road surface. And in 1999, the Vuelta finished for a first time on top of the Angliru. It was a memorable victory for the Spaniard José Maria “Chaba” Jimenez.

Since then, the ascend of the Angliru has been an occasion for the best mountain goats to encounter history. The winners have sounding names like Gilberto Simoni (2000), Roberto Heras (2002), Juan José Cobo (2011), Kenny Elisondo (2013), who’s a bit the odd man out, and two times Alberto Contador (2008 & 2017). In the course of the years, the Angliru gained name and fame in the professional peloton. So bad that David Millar in 2002 set foot on ground right before the finish and refused to cross the line.

The terrible reputation of Angliru also appealed to me, ever since my arrival in Asturias. And finally I swayed to, after the Lagos de Covadonga, conquer the other Asturian legendary climb. As a big cycling fan and a hobby rider, climbing the biggest cols of Europe always tempted me. On my list were: Mont Ventoux, various Pyrenees mountains like Tourmalet, Lagos de Covadonga and many more. But the crown was still to be put on my work.

After a bad night, the big day had come. Catching sleep was hard, as thoughts were swirling through my mind. What would this climb do to me? And how will I feel? In times of Strava, the element of competition is present in every bike ride. The climb wasn’t without obligation, no. Although I knew the 41:55 of Heras in 2002 and the 45:33 of Kruijswijk (the fastest record time on Strava) were out of my league, I wanted to set a good chrono.

How to beat the Angliru

The climb can be divided into two parts. And that’s something you should never forget!

The first 5 kilometers have an average gradient of 7,6 percent, a slope that’s common for many of the climbs in the alps. Then comes the 6th kilometer, which even flats out to 2,1 percent.

Luckily I was aware of the split personality of this monster. So the first part, I constantly paid attention to keep some reserves and especially not falter myself.

So without too much damage, I arrived to the gate of hell. A point, where everything changes quite obvious. Not only do the white painted letters “Empieza el Infierno” (the hell starts) literally say that the climb will get much tougher. The “wall” that suddenly appears in front of you, clearly indicates it too. 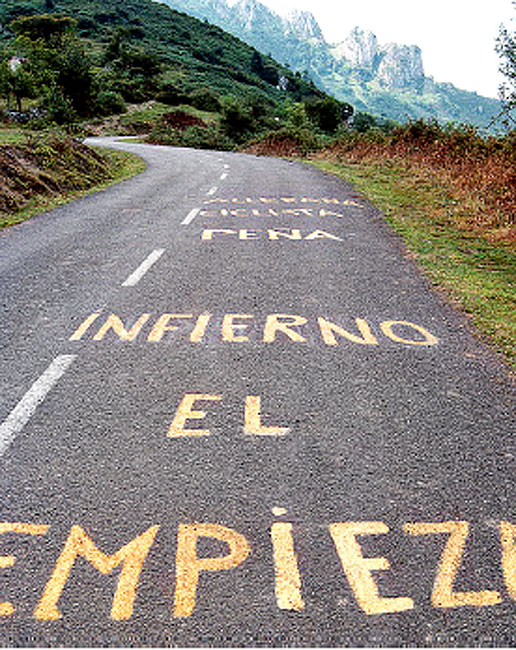 Almost immediately I have to choose the smallest gear my bike has. A gear that I won’t change until the peak of the mountain. It is 6 kilometers long physical and mental fight. You can count the distance off, every km there’s a mark that indicates the distance to be done and the gradient for the next km. It’s not very encouraging to know you’re facing a km of 15 percent average.

Within these kilometers, you have hairpin bends and, which have their own names. Brutal turns and parts where you can find the outliers of the climb.

There’s one part, I especially remember. It’s La Cueña les Cabres. A straight line of 700 meter at 23,5 percent. My Strava tells me I did 13:51 minutes for this part. This means an average speed of 3 km/h. Not surprising, since I had to set foot on ground twice, my speed was so low I simply stalled. Getting started again then is very hard, one instant I even rolled downhill.

In spite of my intention to gradually raise my tempo, these parts altered my goal from a riding a decent time to just finish.

Half of the way, you’re driving in the mist. It’s not very motivating to not see where the road is going to. But it also has its benefits. The last 2 or 3 km you’re really driving above the clouds. A sight that is magical! 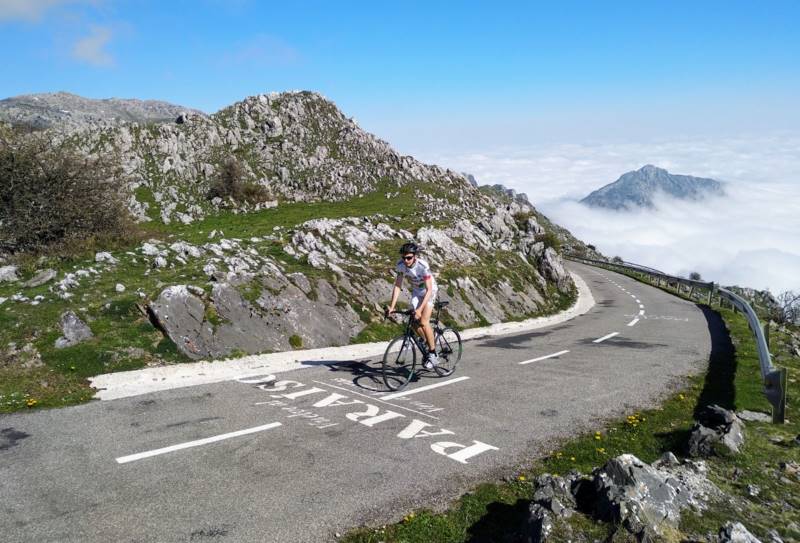 Are you stimulated to climb Angliru yourself and write your own name in the history books of cycling?

The closest train stop is Las Segadas. There’s a connection from Gijón and Oviedo. You are allowed to take your bike with you on the train.

Make sure you have a bike with small gears. You will need them.

Don’t rush, it’s a long and above all immensely difficult road!