MIERES: THE CONNECTION BETWEEN MINES AND GRAFFITI

Mieres is a small town of 44.000 inhabitants located in the Principality of Asturias. This small pearl in the central area of Asturias owes its charm mainly because it’s surrounds by mountains. In these valleys, that surrounds the city, live the riches of the city: from the agriculture point of view, like apple plantations, to the architectonic point of view, with different buildings, as the Santuario de los Martines Cosme y Damian, the Palacio de Figaredo or the mines, now abandoned.

The Mieres’s economy previously was based on agriculture, breeding and commerce, due also to the great connection that this zone has with Asturias. But only in 1840 Mieres reached richness when the process of industrialization of this region begins, mainly due to deposits of iron, coal and mercury. Thanks to these raw materials, Mieres converted the economy to the service industry, completely changing the habits and the jobs of the citizens of this area. The mineral’s sector boom, achieved in the 50s and 60s, has allowed the opening of a Mining School and a train station, that connect Lena to Gijon, increasing the population of this Asturian’s city. 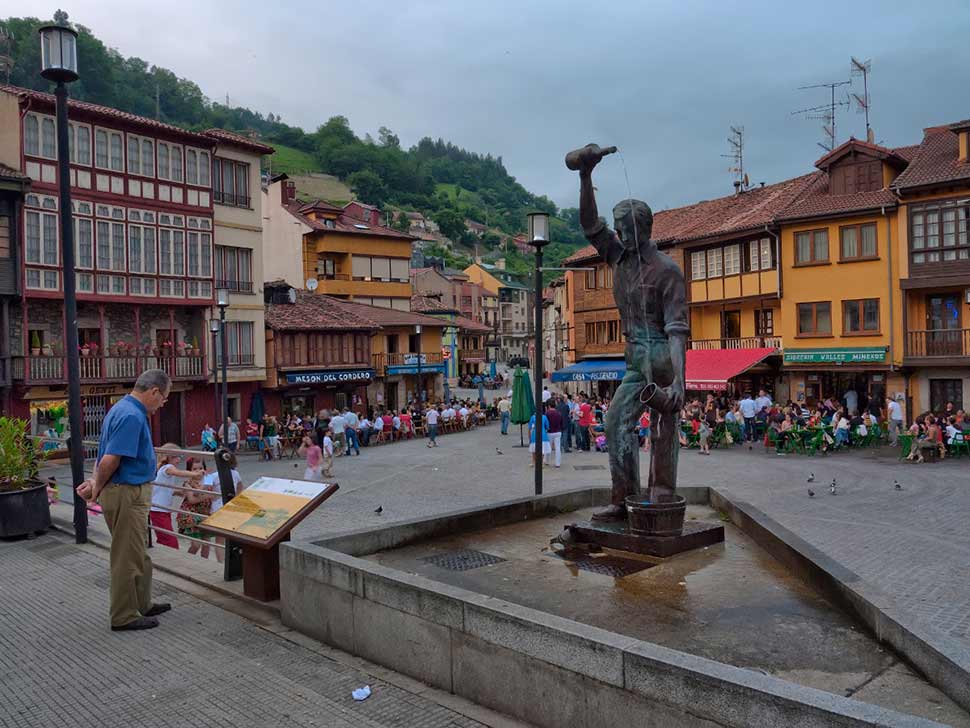 However, the high work and the healthy problems in the mines led in 1934 to the revolution of Asturias, a worker’s insurrection that was part of the revolutionary general strike and the socialist movement in Spain. This revolution was increase by the price of the carbon that wasn’t competitive with the others offers. For this problem and the energy transition of  the new European laws caused the closure of the various mines in Asturia; with this Mieres has lost its main economic route, leaving the city at the mercy of migratory movements towards neighbouring cities searching for work. Mieres and the various industrialized towns nearby (also known as “las cuencas mineras”), emptied of the main economy entry, still today ask the state to create a new economy that will allow this city to rise from mining ashes. From the history in Mieres remains a very important architectural mining heritage, such as Pozo San Fernando, Pozo El Tarronal and Pozo Soton, mines still present in the territory. Another important architectural mining heritage is the city of Bustiello, previously exclusively inhabited by the various families of migrated miners in this area. In this area, thanks to his history, there is University Campus, connected with the University of Oviedo, for mineral engineering. 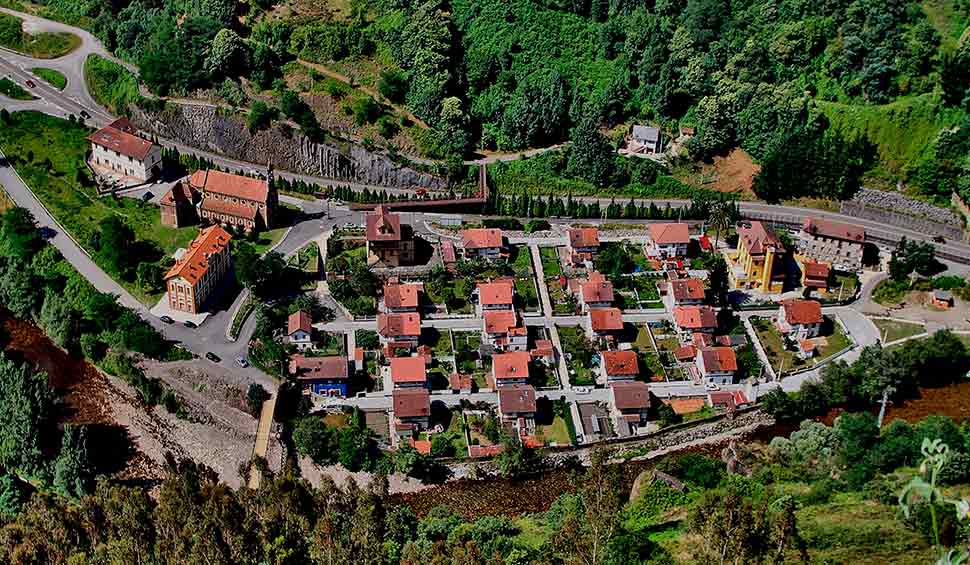 Now on the various mines, completely oxidised, remains only the rubble remains; just to leave the bitter memory of a luxuriant past. In addition to the architectural heritage, Mieres is also known for its artistic heritage, mainly due to the countless graffiti of the town. The presence of urban art and graffiti in Mieres is very wide, compared to the number of citizens who currently live in this area.

In recent years Mieres reveals itself as a referent in a provincial level of urban art. In this sense, the municipality took a huge step forward when it decided to make public money available for the restoration of one of the most significant graffiti in the city: the portrait of 2Pac created by the Asturian artist El Septimo Crio.

We had the opportunity to meet the artist, Cesar Frey, and have a chat about these topics:

ESC: “A public institution that makes public money available for the restoration of a graffiti in the street is extremely complex to happen. It’s certainly an important step forward for urban art”

Before Mieres, only Madrid restored, with the help of the University of restoration, a graffiti by the first graffiti artist in Spain: Muelle.

ESC: “The restoration of Mieres was different because I did the restoration myself, adding new parts to the drawing, and above all because Mieres managed to establish itself nationally, with Madrid, as one of the most progressive cities from an urban art’s point of view.” 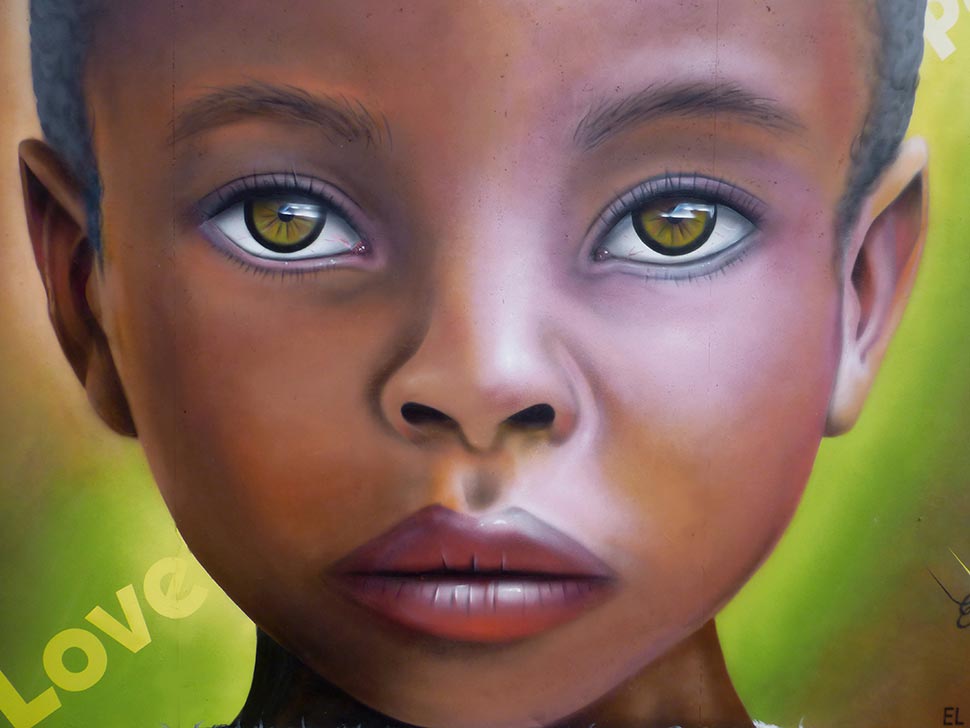 Chatting with El Septimo Crio we find out about his starts and how he’s work is connected to the mine’s culture.

ESC:“By my family and my grandparents, I find out everything about the mine’s life. This give me a lot of inspiration. In the beginning of my work I usually mention the mine’s culture or the mine’s way of thinking with my graffiti. Evindetly the miners, for the hard work, had a different way of thinking and a different way of act. And I’m trying to put this mentality into my work. Because I want that my work has always a revendicate part and a message inside it”.

This mine’s past is connected with the current urban art, expressing the mine’s culture from a different point of view. Now, thanks to the urban art, the mine culture remains alive in this city.

You can find out more of the connection of mines and urban art in our video interview with the writer El Septimo Crio.

USEFUL TIPS: HOW TO GET TO MIERES

Train Renfe: with the train is easy to get to Mieres from all parts of Asturias. The price is 5 euros both ways.

Bus Alsa : Another option is the bus, that takes a bit longer then the train but it worth it for the view of the beautiful valleys. The price is 5 euros both ways.